Thank you for your payment! We will appreciate your business!
Skip to content
×
× 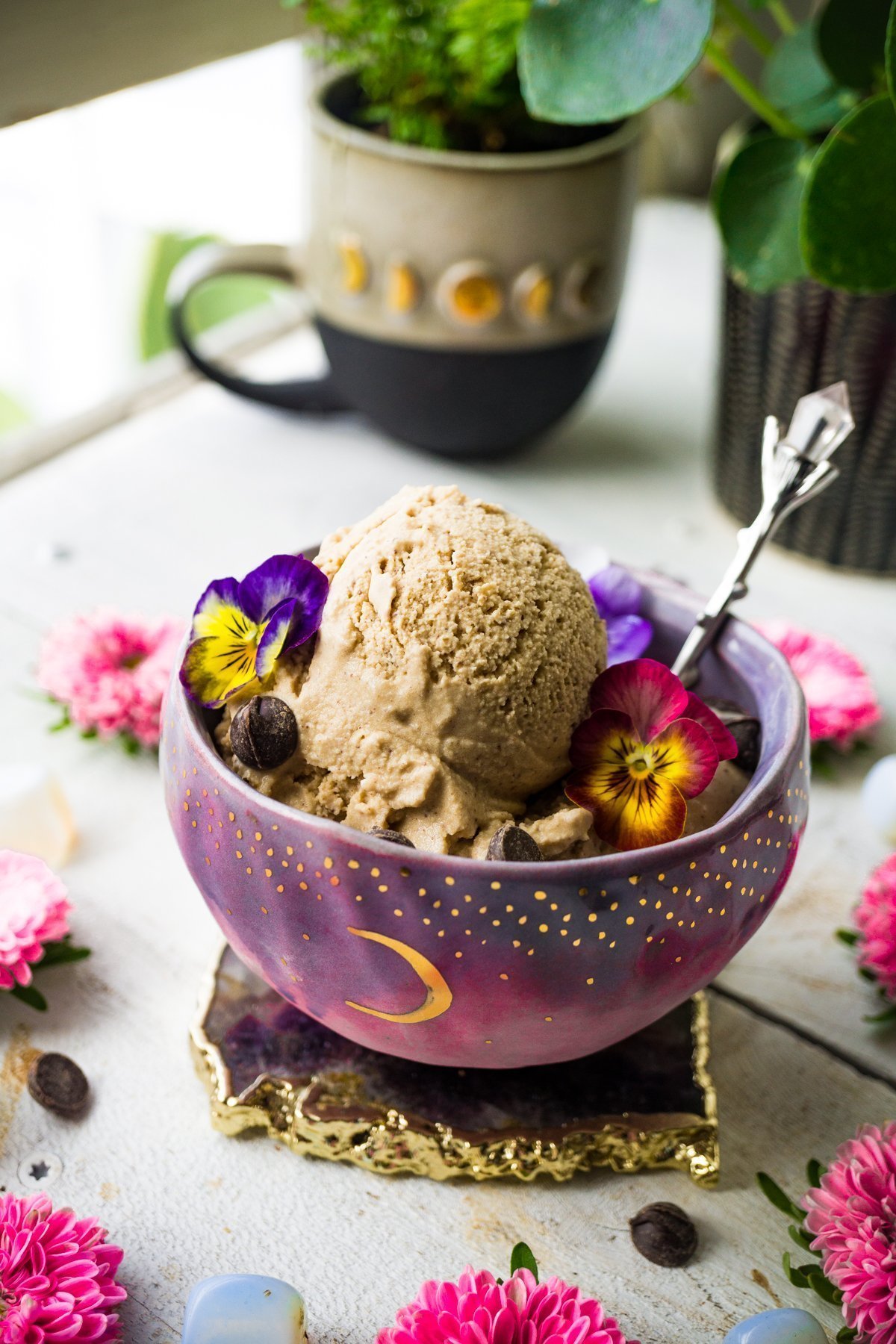 This Adaptogenic Cold Brew Coffee Coconut Ice Cream is so creamy, super smooth and soothing with heavenly notes of coffee. The days here in Southern California are starting to warm up, which has me longing for a cool bowl of ice cream! I knew that I started to get the craving for ice cream, but I was prepared. I had my ice cream maker’s bowl in the freezer waiting for the right time, which was today.

So, instead of my warm cozy morning latte like I usually make, I decided it was time to cool things off a bit and make ice cream using that’s similar in flavor to a latte, but on a much cooler spectrum. That’s how I decided to make this adaptogenic cold brew coffee ice cream. The ice cream is subtly sweet with the chocolatey notes from the coffee and cacao. The coconut milk and cream base adds a silky smooth finish. 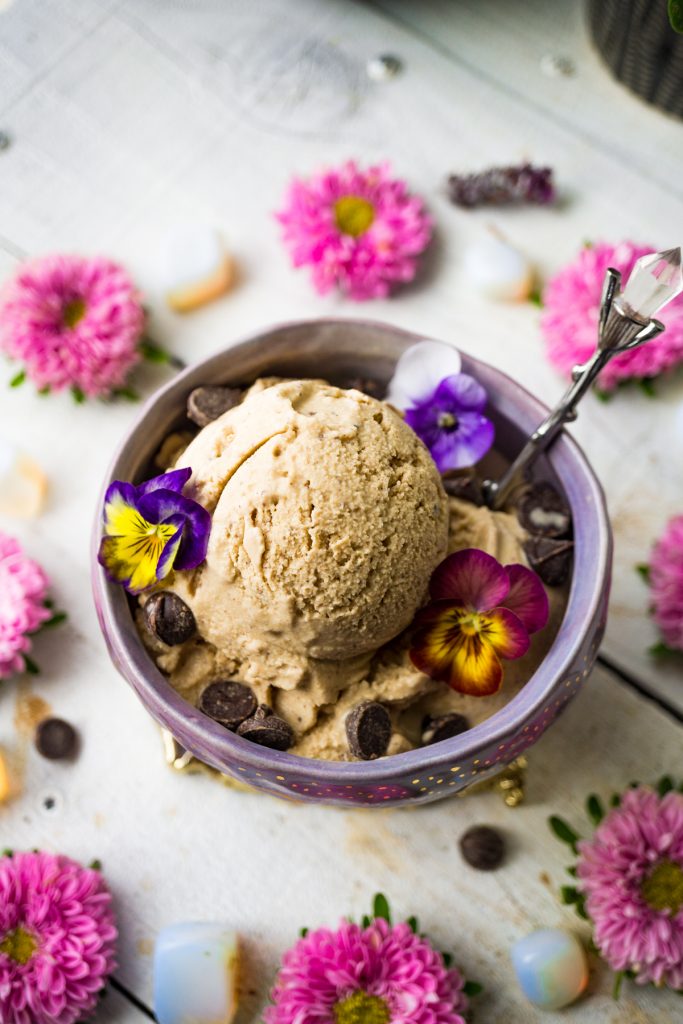 All About That Base

For the base of this ice cream, I chose a vegan-friendly combination of coconut milk and coconut cream.  I believe that the coconut milk and cream combo creates the smoothest possible base for ice cream. There’s an added sweetness that comes across as the ice cream melts in your mouth from the coconut heavy base. It also fits a dairy-free lifestyle but can be enjoyed by someone who isn’t dairy-free. 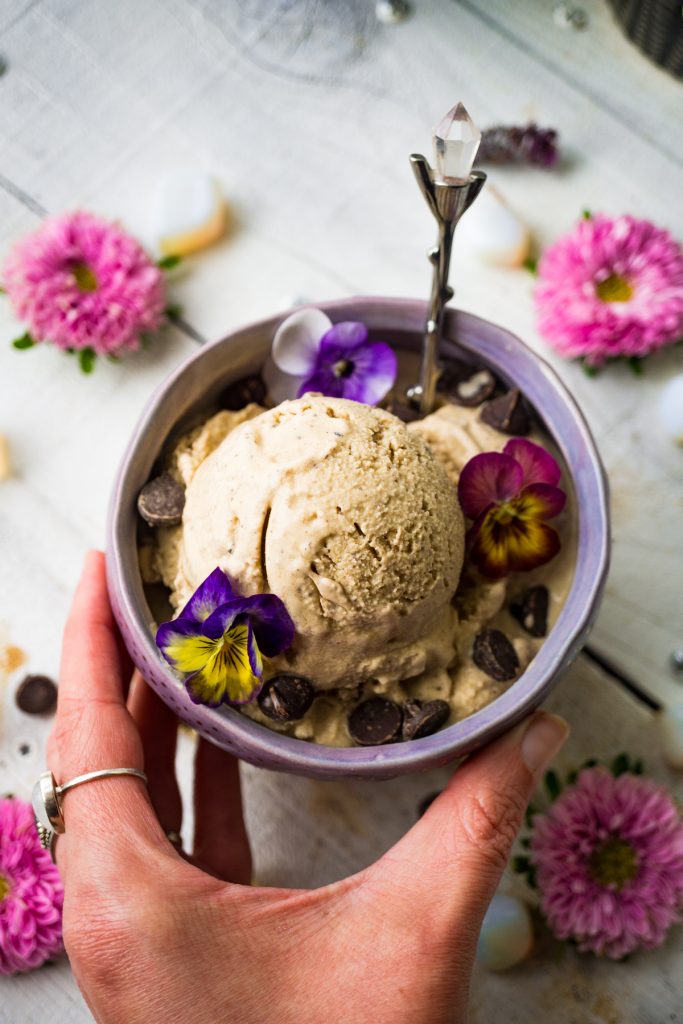 You’ve probably heard me talk about how much I love RASA adaptogenic coffee if you’ve followed me on Instagram (@mytinylagunakitchen). Well, guess what, I used it to make the cold brew for this recipe! RASA is absolutely amazing and is jam-packed with adaptogens and herbs. For someone like myself who is highly sensitive to caffeine, but loves chocolatey flavor profiles and the taste of coffee, RASA is the answer. The adaptogens and herbs, when steeped, bring out flavor notes similar to that of your favorite cup of coffee.

They do offer a slightly caffeinated blend called Dirty RASA that includes all of the wonderful herbs and adaptogens with a hint of actual coffee. I found that I can drink this blend even with my caffeine sensitivities. That’s because there isn’t much coffee and the adaptogens help to slowly absorb the caffeine. I don’t get the jitteriness or increased heart rate that I’d usually get with a cup of coffee. It’s absolutely delicious and I can join my love, Dan in his morning coffee routine.

To make the cold brew that I used in this ice cream, I steeped Dirty RASA in coconut milk in the refrigerator. During the steeping process, it allowed for full flavor extraction from the herbs and adaptogens into the coconut milk. I then filtered out the RASA which left for a super tasty cold brew which was dark and flavorful for the ice cream.

I used RASA for this specific ice cream, but if you aren’t as sensitive to caffeine, you could definitely use your favorite beans or cold brew to make this recipe. 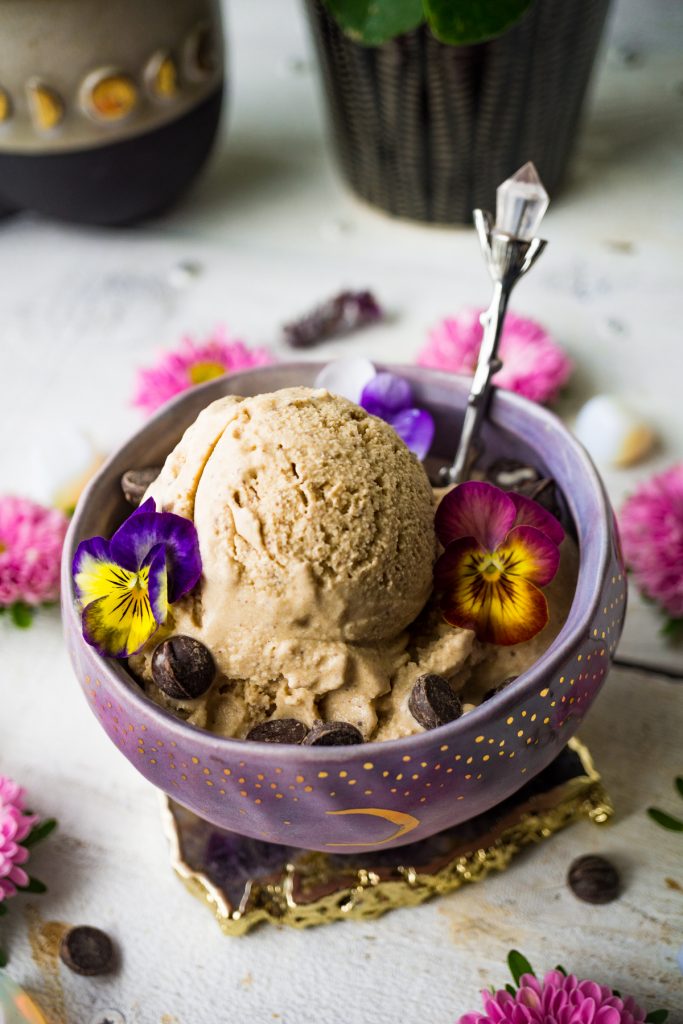 When it came time to combine the base of coconut and the RASA to make this Adaptogenic Cold Brew Coffee Coconut Ice Cream, I immersed the two together and let them sit together in the refrigerator for 1-2 hours. This allowed the cold brew and coconut to mix and cool down. I placed the mixture into the ice cream maker and let it run until we got silky smooth ice cream! For extra chocolate, I recommend adding some Lilly’s sugar-free chocolate chips.

I’m super happy how this recipe turned out! It’s the perfect treat for a warm summer day (or really any day that you like ice cream). The best part about the ice cream? Those who are not dairy-free will also find this ice cream to be extremely magical and delicious so it’s enjoyable for everyone!

Sunflower Lecithin Powder is optional, but I recommend using it has a natural emulsifier. 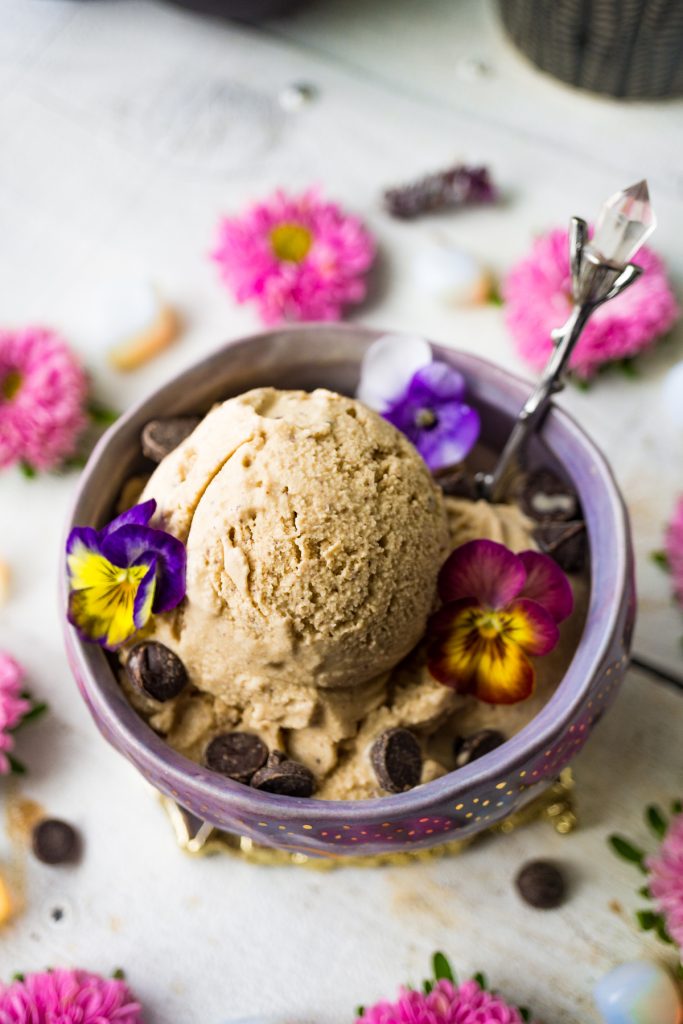 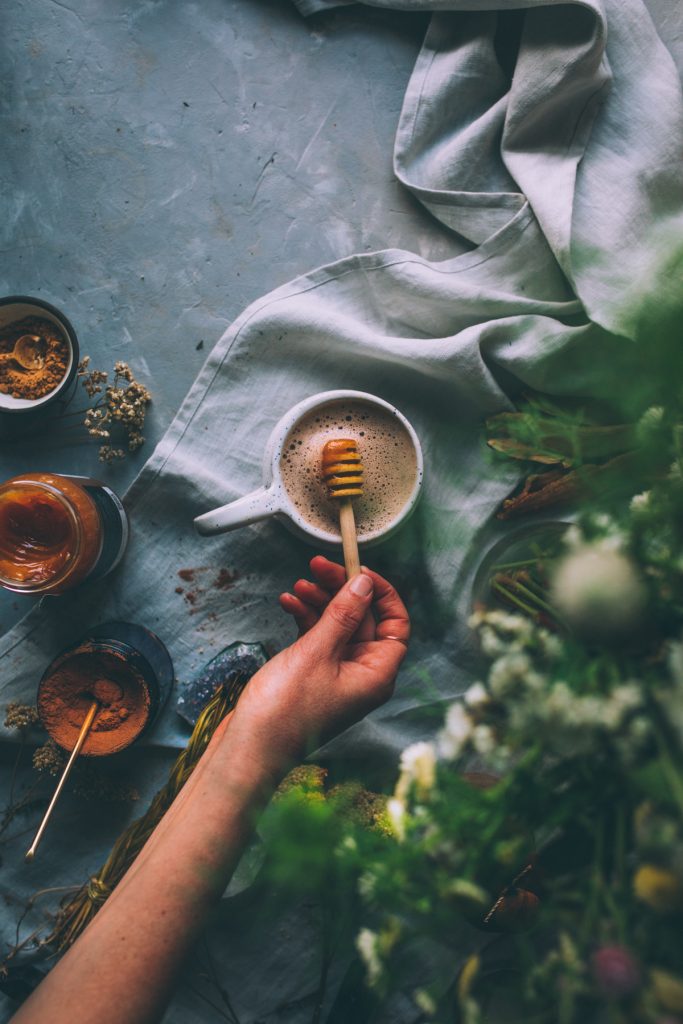 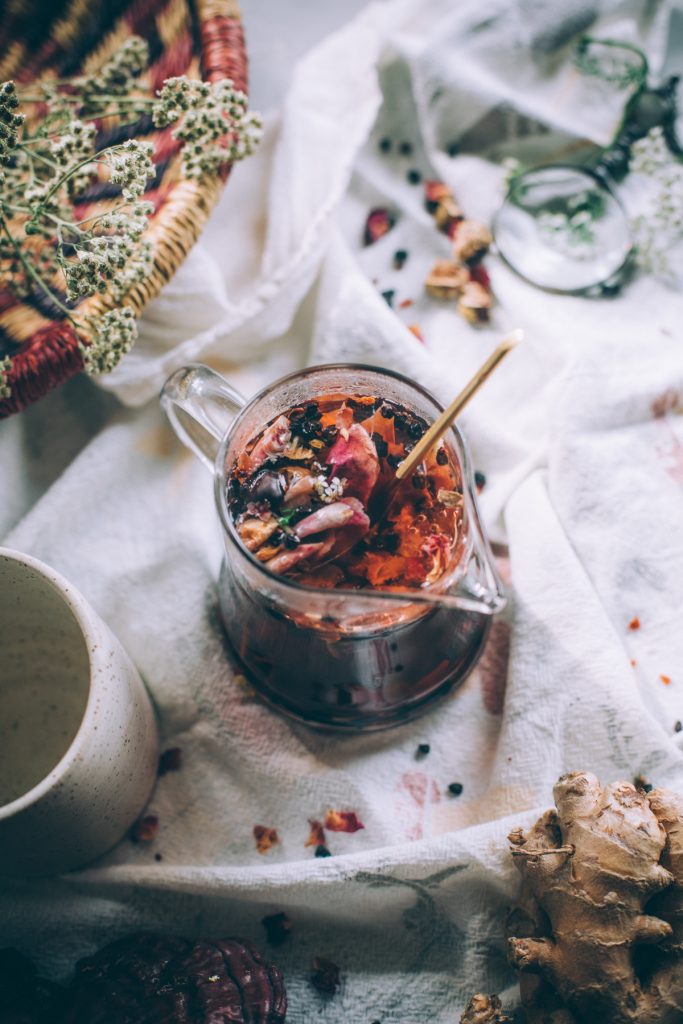 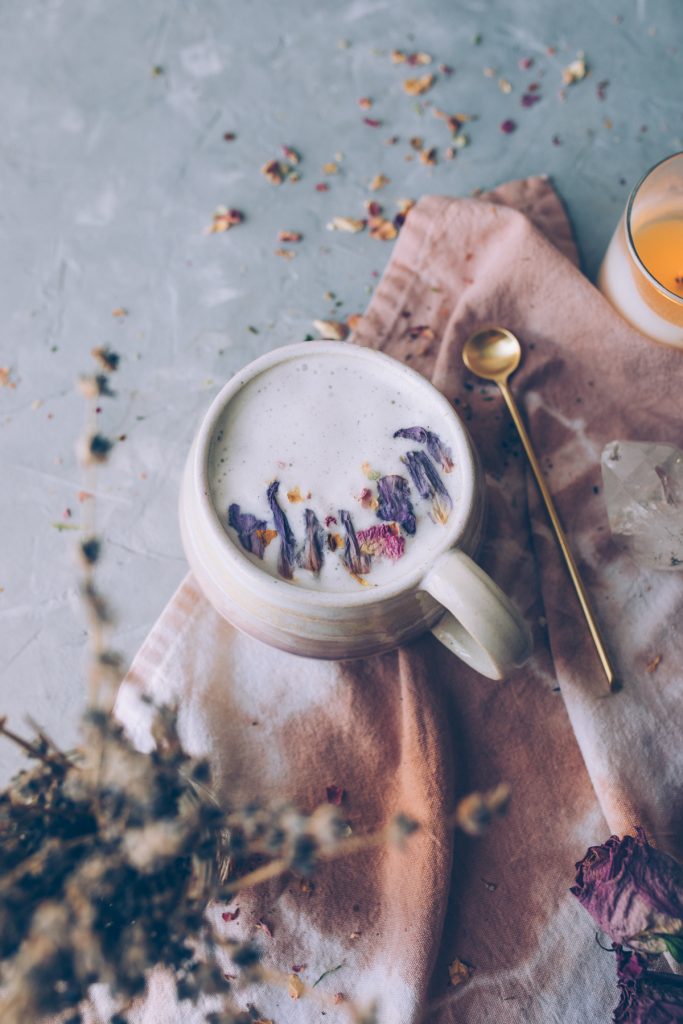